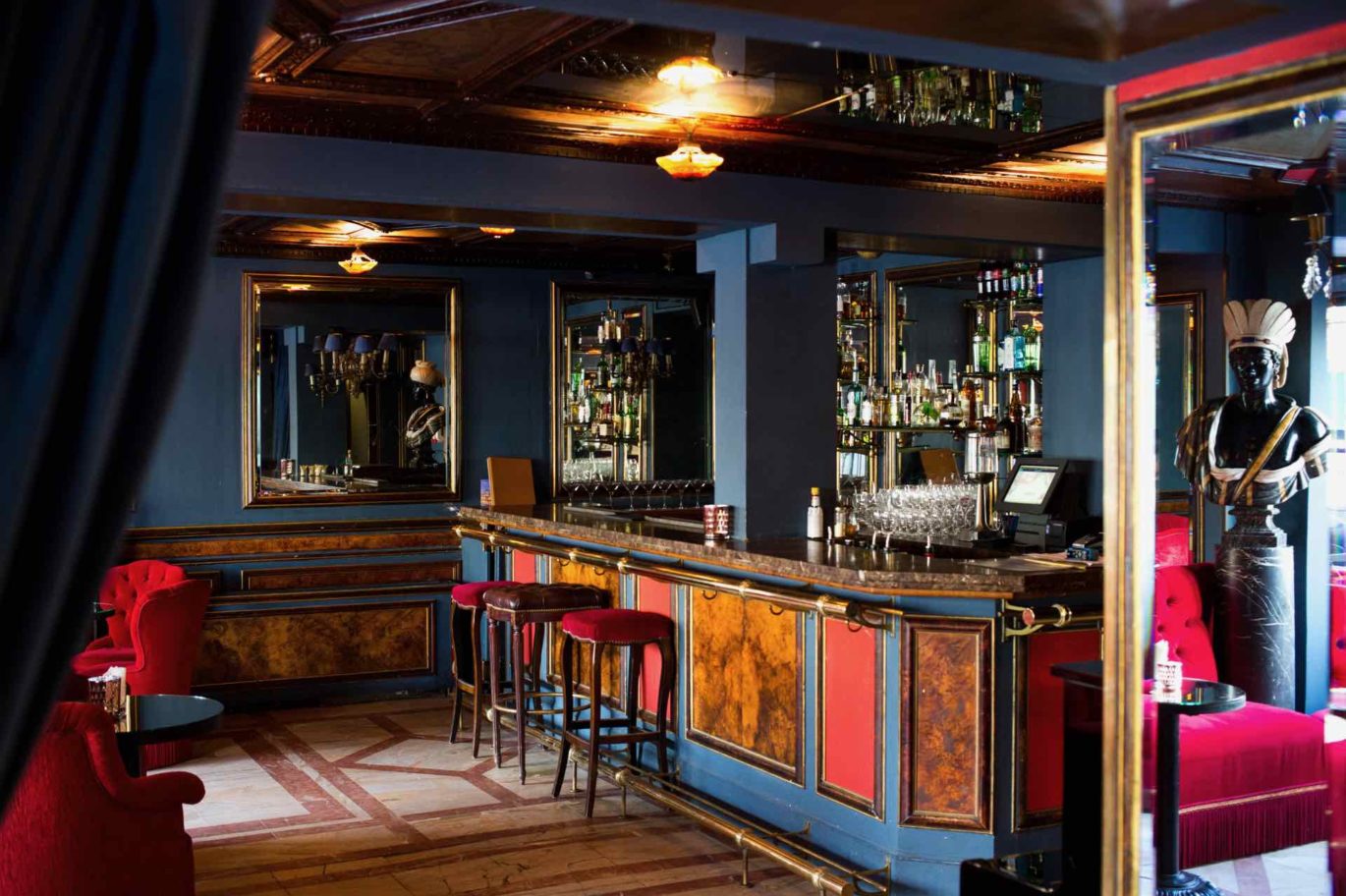 You set foot inside this place and you travel back in time. Just like Gil, the main character of Woody Allen’s “Midnight in Paris”, who met there Ernest Hemingway. Apart from Hemingway, Polidor is said to have hosted James Joyce, Henry Miller, Victor Hugo, and Paul Valéry. Come and experience Paris classics in the menu, as well as the interior which hasn’t been changed since 1845. This restaurant attracts people from all around the world looking for “the real Paris”, and we guarantee that they’ll find it.

What about eating at the same table as café society of the XIX century did? Intrigued? Just book a table at Brasserie Lipp. This place has been present on the gastronomic map of Paris since 1880 and the cooks have remained faithful to classic French cuisine. You will be impressed with the names of guests who have visited this place, including such notable poets and writers as Camus, Proust and Hemingway who wrote his prewar telegrams there. Surrounded by original mirrors, tiles and plafonds, you will feel like taken on a time travel to the Belle Époque!

Book a table if you want to eat in the second oldest restaurant in Paris where Victor Hugo, Emil Zola and George Sand dined regularly. This posh place has retained the charm of the Belle Époque in its décor. Even the decorative mirrors still bear the scratches made by mistresses testing on them the authenticity of diamond rings – presents from their lovers. You can spend a truly intimate and memorable evening in one of “chambres particuliers” (advanced booking required). The menu, accompanied by the great wine list, will appeal to gourmets who appreciate French classics – here hidden under intriguing names such as “Victor Hugo Lobster Soup” or “Meuniere Laperouse Beautiful Sole Fish”. Treat yourself to a little luxury!

There’s no other place as typically Parisian as Benoit. I have a very special affection for this beautiful house, with its own history and generosity. Benoit is a friendly place, full of memories and shared pleasure. It reflects a certain way of life and tradition that we want to preserve .

A rich history
Opened in 1912, Benoit celebrated its 100 years anniversary. It is a venerable age for the one and only Parisian Bistro to be starred by the Michelin Guide. The restaurant has still a lot of vitality and remains the traditional Bistro cuisine in the heart of Paris.
Until April 2005, the Petit family owned Benoit for 93 years : a familial place, transmitted from generation to generation. Benoit Matray – the grandfather of Michel Petit – creates the restaurant in 1912. This former butcher with a lot of culinary knowledge turns the place into a traditional cuisine restaurant. Its customers come from the neighborhood and are the retailers and artists from the Halles. The restaurant becomes soon a must and a very animated place where Benoit Matray welcomes his guests as a generous friend.

In the 1950’s, Benoit Matray hopes that his grandson will get the succession as the Chef of the kitchen. His dream comes true as Michel Petit takes over the Benoit restaurant in 1961. At this time, many changes are made: a private lounge is created on the 1 st floor, the kitchen is modernized, the guest room becomes bigger, and the cellar is embellished. According to the Beaujolaise tradition, the wine is bottled here : you still could see the hook at the entrance of Benoit that served to get down the barrels in the cellar. The place remains also the memory of the grandmother Marie, the author of a secret recipes book that made the success of the restaurant . And as a real family story, Madame Petit, the wife of Michel Petit, has drawn the plates and the “trompe-l’oeil” in the 1 st floor salon.

After the departure of the famous market of Les Halles in another neighborhood, a new kinds of customers come to Benoit to enjoy it’s convicial atmosphere. The artist and wood engraver Lesage is one of the most loyal customers, and imagines one night this now famous slogan: “At Benoit, drinking and feasting like kings”. Lesage also customizes the menu with very festive drawings.
After many years of success and sharing, Michel Petit and his wife Catherine decided to sell the Benoit restaurant to Alain Ducasse, in order to perpetuate the tradition and authenticity of this Parisian bistro with a touch of modernity. The Petit family couldn’t imagine that letting Alain Ducasse take over Benoit will give to the restaurant an international reputation… as a superb tribute, in 2005 appeared the name of Benoit in one of the most famous neighborhood of Tokyo , as Alain Ducasse exported the bistro in Japan. After 100 years, the story continues…

The typical Parisian bistro atmosphere
Push the door and come to discover Benoit in its warm and comfortable atmosphere. From tile to woodwork, from red velvet seats to brass, from engraved glass windows to fake marble columns, from the lightings to the bar, from the huge mirrors to the art paintings, the whole decoration gives a peaceful feeling and a sensation of time travel. On the upper floor, a private room with a large oval table welcomes the guests. The paintings on the wall, the terracotta tiles, the decorative panels above the doors and the fireplace will make you feel at home.

In 1832, Alexandre Pharamond settled in Paris in Les Halles to sell histripes “à la mode de Caen”. Then he built his restaurant in 1879 which is a unique place, a real 2 storey-house. The decor, today listed as an historical building, is an amazing mix of wood, painted mirrorsand molten glass.

You must visit the private rooms on the 2nd floor where Clemenceau or Hemingway used to come. You may reserve one of them (2 to 50 people) for your professional or private events.

In 1903 the confectioner Antoine Rumpelmayer founded Angelina, which he named after his daughter-in-law. For over a century the tearoom has built a reputation as a place of sophistication and indulgence. As soon as it opened, Angelina became the place to be among the Parisian aristocracy. Proust and Coco Chanel rubbed shoulders with the biggest names in fashion in Angelina’s salons.

The interior, designed by the famous Belle Epoque architect Edouard-Jean Niermans, combines elegance, charm and refinement to create a sense of romanticism and poetry. Angelina is a tranquil, exquisite space, somewhere between serenity and indulgence.

It serves first as a warehouse for coal and wood, then wine. In 1914, the Fouet family owns the place and decides to open the room on the street to showcase wines to the customers : the bistro is born.

Daniel Violet takes over the bistro after the Second World War : it soon becomes the most famous “Bouchon Lyonnais” of Paris. The authenticity of the place and the passion for the Lyonnaise cuisine and its taste soon seduced Alain Ducasse, who becomes the owner of the restaurant in 2002.

The bistro has retained its traditional wooden facade and its old “Maison Lyonnaise” sign on the front. It perpetuates the traditional atmosphere of “Bouchons”, those little bistros in Lyon.
Inside the room, you will experience a real time travel: on the buffet, the old coffee machine releases some steam and a nice smell of coffee. Behind the old wooden counter covered with zinc and tin, a few bottles wait under a continuous flow of cold water to be served.

Woodworks and floral moldings, old style lightings and “metropolitan style” pottery on the walls and the ceilings: the magnificent decoration of the restaurant is all about Art Deco.
Creations signed by the famous glassblower Jean-Claude Novaro from Biot – a little village in the South of France – punctuate the room. Everywhere beveled mirrors show back the spectacle of the rooms on two floors: servers coming on and back with copper frying pans or cast iron pots in the hands. On the old school oak tables with steel frames, some white plates and napkins, silver cutlery, faceted water cups and balloon wine glasses wait for the guests.

Les Noces de Jeannette is a restaurant with more than a century of history behind it. Inside, the décor evokes the story of Opéra Comique and Paris’s iconic Grands Boulevards. With its five rooms, Les Noces de Jeannette can host business lunches, romantic meals for two or family dinners, as well as private, family and professional events. The restaurant offers traditional French cuisine made with local products and an impressive selection of wines from independent winemakers. Located in Paris’s 2nd district, or 2e arrondissement, the restaurant is open every day for lunch and dinner.