The museum is installed in the painter’s family home, as a project conceived by Gustave Moreau (1826-1898). The apartments on the first floor form a small sentimental museum displaying family portraits and works given to Moreau by his friends Théodore Chassériau and Edgar Degas.

The second and third floors are taken up with huge studios, containing hundreds of paintings and watercolours. The walls are covered with over four thousand drawings that give a broad perspective of the techniques and subjects of the undisputed master of French Symbolism. A unique house-studio in Paris, the Musée National Gustave Moreau has managed to retain all the magic of its original atmosphere. 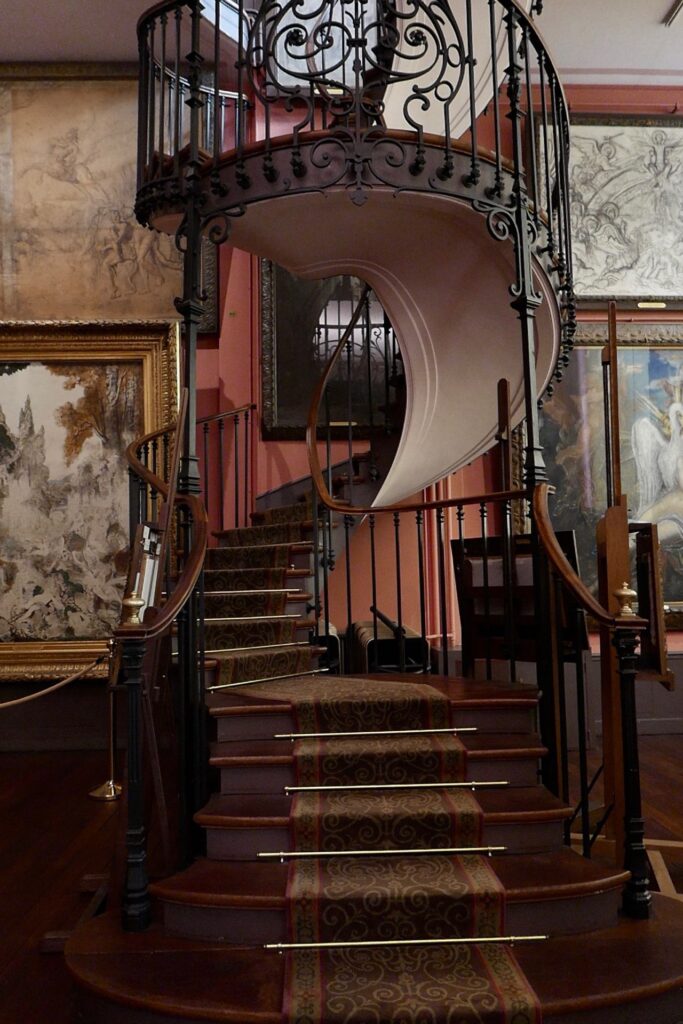 The art of Gustave Moreau

With his Academic, Romantic and Italianised styles, Gustave Moreau could only be an eclectic artist, borrowing, like so many of his successful fellow artists, the constituent elements of an impersonal style. There are times when Michelangelo’s prototype of an ephebe can be detected in his figures or when the bluish backgrounds and chiaroscuro of Leonardo da Vinci are a little too evident. But mostly, these references, along with a taste for the sinuous lines of Indian miniatures and a precision of line and shape inspired by a thousand and one models collected from engravings, all combine in the end, blending inextricably to form original, highly individualised creations, that resemble no other. Moreau believed that painting was, by definition, a rich art, which should aim to rival the intense colours of enamel painting: a work like Jupiter and Semele is an excellent example of this principle.

For Moreau, as for da Vinci and Poussin, artists he liked to refer to, painting was a cosa mentale. It does not seek to recreate on canvas an observation of nature but first and foremost addresses the spirit, and comes from the innermost depths of the artist. Moreau wanted to create a body of work where, in his own words, the soul could find: all the aspirations of dreams, tenderness, love, enthusiasm and religious ascent towards the higher spheres, where everything in it is elevated, inspiring, moral and beneficent; where all is imaginative and impulsive soaring off into sacred, unknown, mysterious lands. Moreau’s painting is meant to inspire dreams rather than thought. It seeks to transport the viewer into another world.

Even in his choice of subjects, Moreau wanted to distance himself from the facts of reality and experience. A deeply religious person, although non-practising, he felt that painting, a mirror of physical beauty, also reflected the great fervour of the soul, the spirit, the heart and the imagination, and had fulfilled the divine needs of mankind throughout time.

“It is the language of God! One day the eloquence of this silent art will be appreciated. I have lavished all my care and endeavour on this eloquence, whose character, nature and spiritual power have never been satisfactorily defined. The evocation of thought through line, arabesque and technique: this is my aim.”

Symbolism, in the strictest sense of the word, consisted of a close-knit literary circle with a manifesto published in the Figaro by Jean Moréas in 1886. Their desire to free themselves from the Rationalist thinking demanded by science, was shared by many 19th century artists. Rejecting all Realism and all Naturalism, this cultural movement spread throughout Europe at the end of the 19th century.
Just before he died, Gustave Moreau would say, in 1897, that all his life he had been unjustly accused of being too literary for a painter. Moreau remained convinced that “divination, the intuition of things, belongs to the artist or poet alone”. In claiming to be a history painter, Moreau breathed new life into this moribund genre. He who hated above all else the “art of the wine merchant” deliberately gave his art a spiritual dimension.
Taking the traditions of the past as his basis, he would force himself to express his “inner flashes of intuition”, and to give a preeminent role to imagination. As André Breton so rightly said, his genius was to have given new life to classical and biblical myths. With a bold accumulation of detail and unprecedented skill with line and colour, Moreau sought, above all, to preserve the mystery of his creation. It was therefore no surprise when the Surrealists claimed to be his successors.

When this museum opened in 1903, the first visitors were amazed by the huge number of sketches. The aesthete Robert de Montesquiou warned them: “You won’t find any of his finished works there”, while a critic denounced “the current mania for the sketch and unfinished works.” It was only in the 1960s that people began to take an interest in these sketches.
An unsuspecting forerunner of a new movement in art, Gustave Moreau spoke, at the end of his life, of the happiness of a hard won emancipation. “Now that I no longer have any desire to defend myself, nor want to prove anything to anyone, I have reached that salutary state of delightful humility as regards my old masters from the past, and can enjoy the unique pleasure of expressing myself freely, without external constraint.” Freed from the weight of tradition, Gustave Moreau then moved towards a daring “tachiste” interpretation of certain subjects without moving away totally from the traditional themes of history painting. The watercolour The Temptation of Saint Anthony is a perfect example of this new direction.
Moreau kept a great number of paintings, watercolours and palettes that today we are quick to call abstracts, but which were never shown in his lifetime. It was only when the museum opened that these painted sketches were framed and exhibited, mainly on the ground floor.
In the absence of any explanation by the artist, their interpretation still remains a mystery. 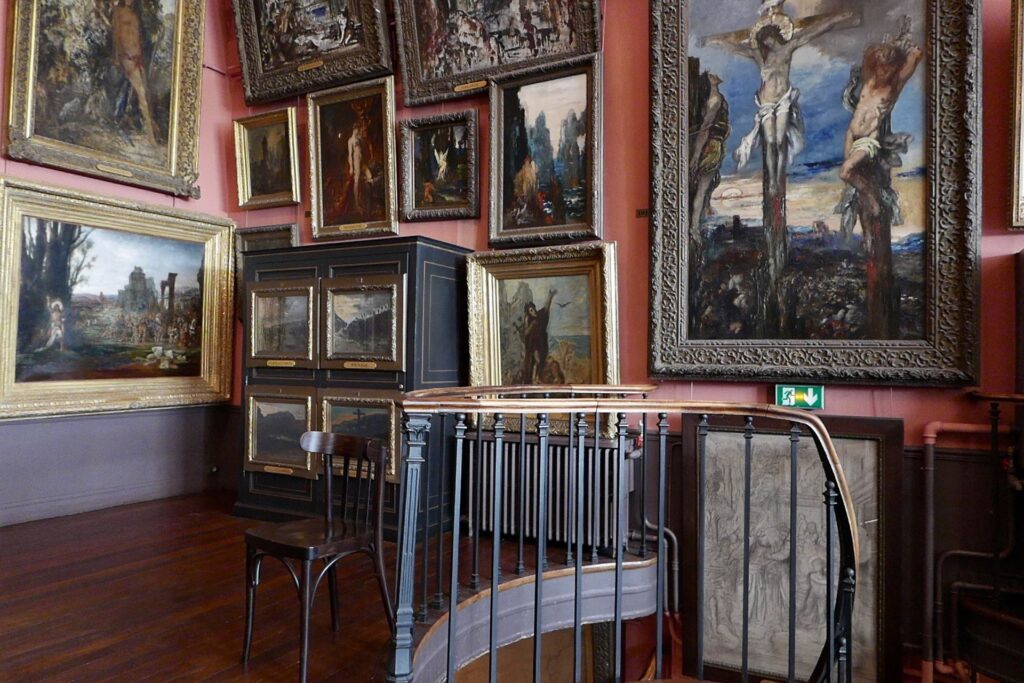 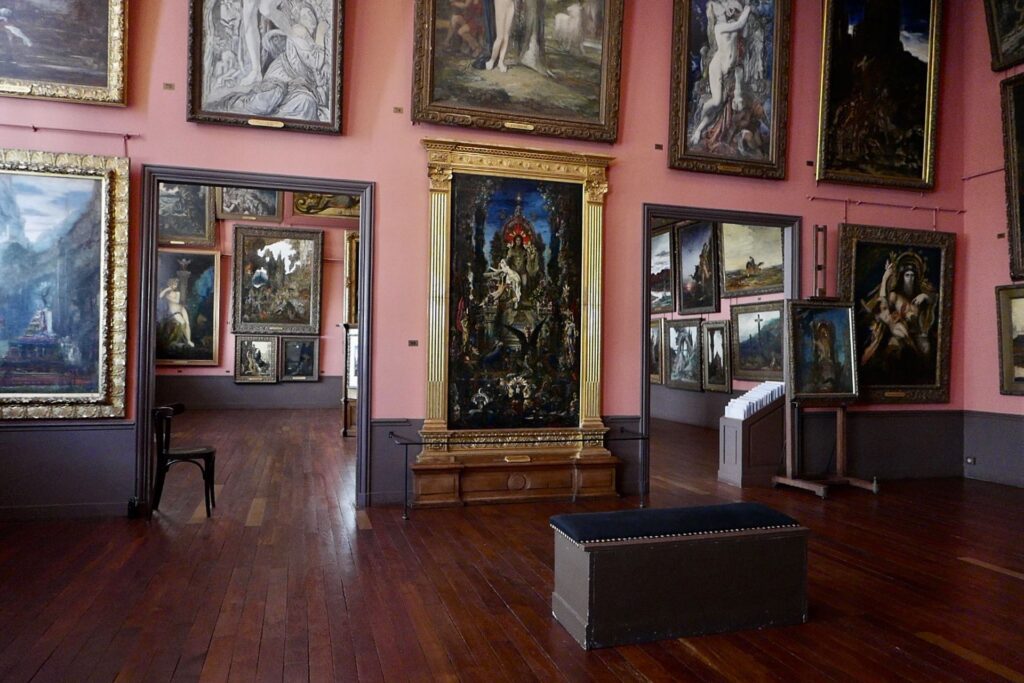 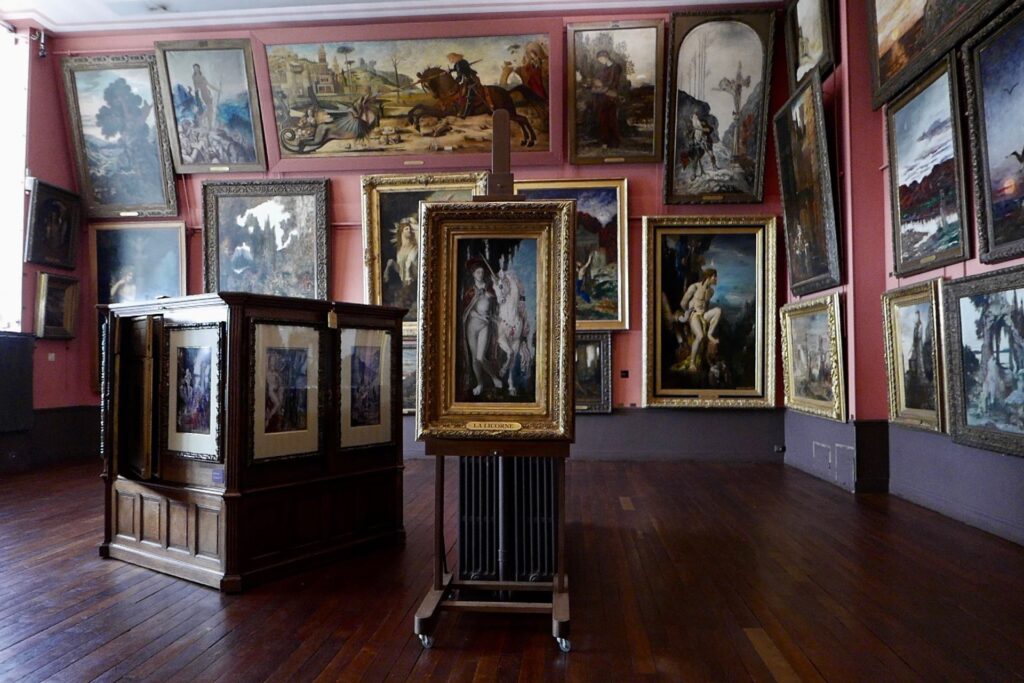 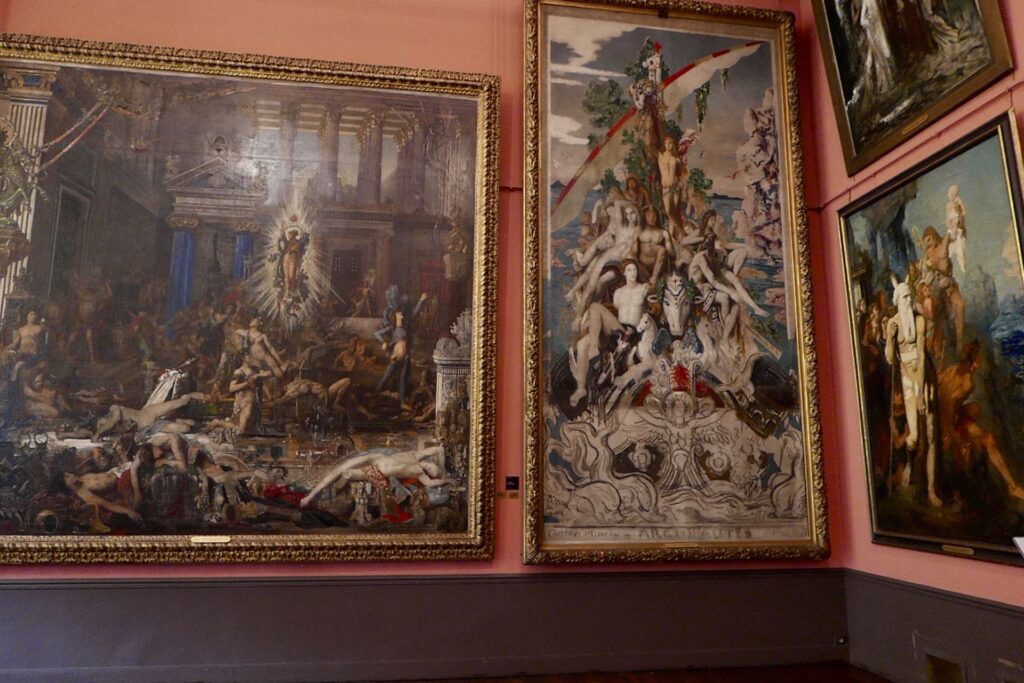 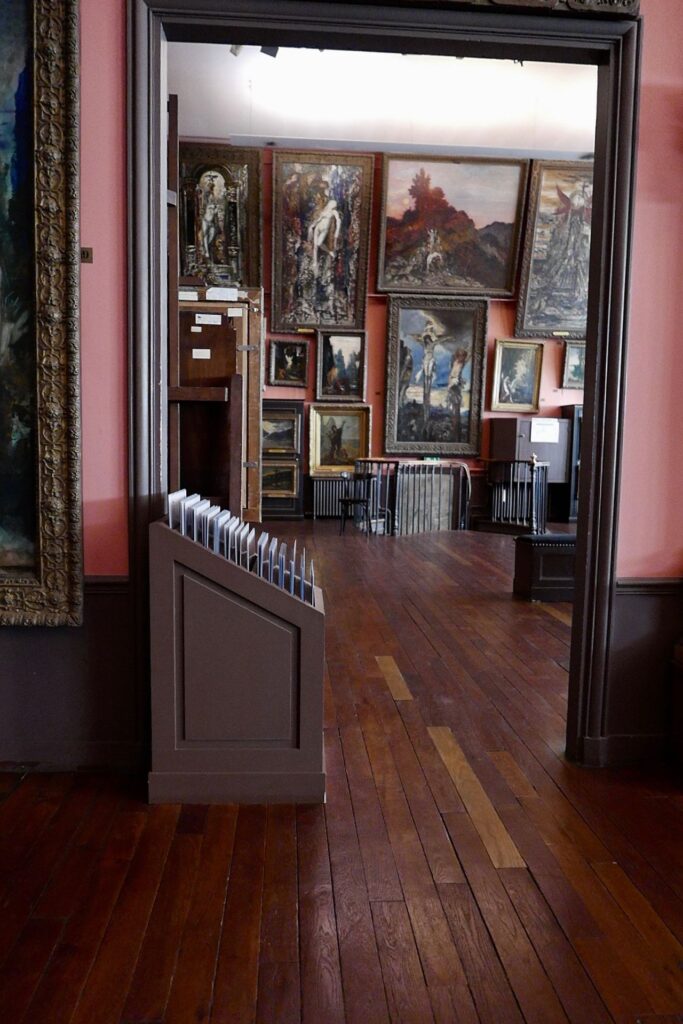 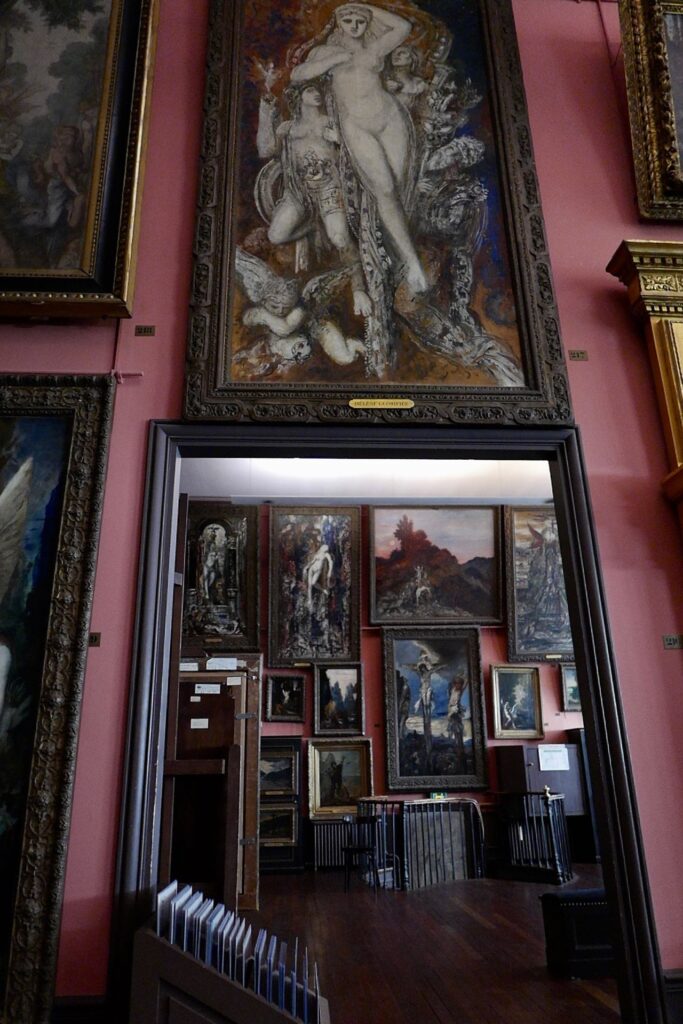 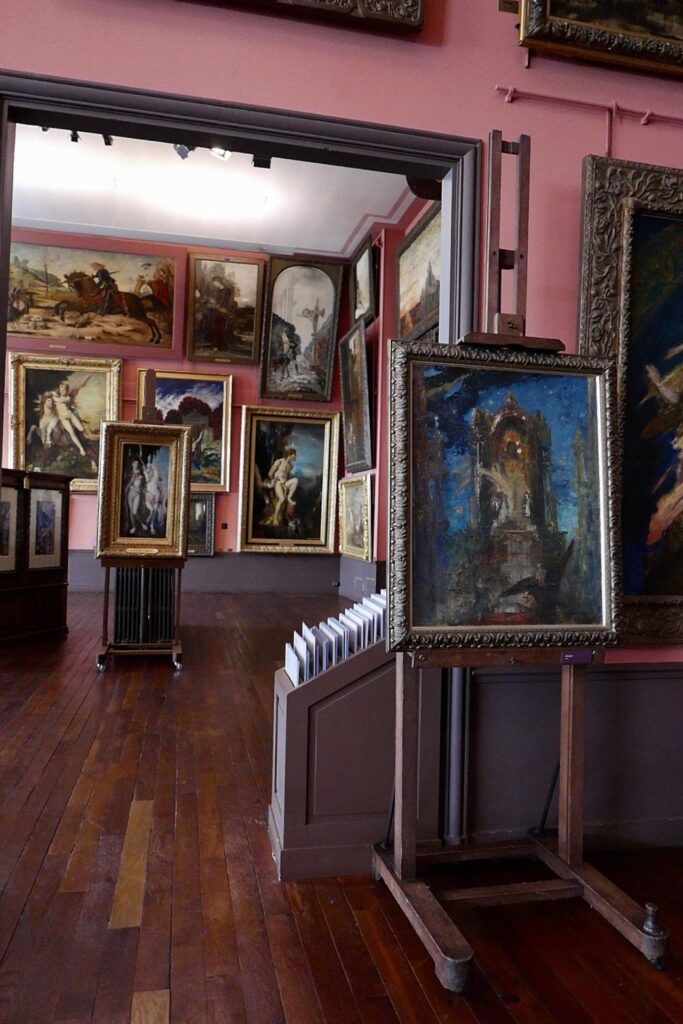