Monika Sosnowska’s exhibition is the first such large monographic presentation of the artist’s oeuvre in Poland. It features the older works selected from her comprehensive output as well as more recent works focusing around new themes and inspirations. The exhibition fills the space of Zachęta’s seven main rooms in such a way as to facilitate tracing the conceptualisation and changes in the artist’s works created across a broad sculptural, architectural and technological context. Sosnowska’s art stems from the tradition of modernism which is reviewed and processed in a consistent manner.

Monika Sosnowska has become famous for her works inspired by early and post-war architectural modernism, in which she sometimes refers to iconic projects, such as Lake Shore Drive Apartments by Mies van der Rohe (1948–1951), in Tower (2014), but first of all explores the architecture of socmodernism – the construction projects created in Poland in the 1960s and 1970s. The topography of modernism that she examines is expanding: her recent works are an expression of her fascination with Russian engineering architecture by Vladimir Shukhov and her interest in post-war modernism in Asia.

The starting point for her artistic strategy has been the architecture of post-war urban modernisation — look-alike concrete housing estates, shops, urban infrastructure (market stalls, barriers, gates, etc.) characterised by austerity, often shoddy construction. An important reference point is constituted here by façades, walls, and spatial modules: rooms and corridors with their typical interior design (wainscoting, wallpapers) and so-called small architecture: handrails, stairs, doors, door handles, and lamps mass-produced in line with the principles of technology and materials available in the communist period. Architectonisation of sculptures consists in using the language of architecture and construction in an unprecedented way: these include appropriations of solid elements reproduced precisely one-to-one, deformed, and stripped of their original function. It involves questioning the rational foundations of architecture — structural elements change into abstraction, conciseness and logic get disrupted, which brings in uncertainty and chaos. The force exerted on the construction materials (steel, concrete) is used to test and sap their strength. Such action creates an impression of plasticity of matter and illusion of lightness. In a way, it shows the forces that are invisible when one experiences architecture directly.

The narrative of Monika Sosnowska’s exhibition at the Zachęta begins with the steel top rail coated in red PVC, in a manner typical of socmodernism (Handrail, 2016–2020); it runs first entwined with the existing handrail of the gallery building, but it continues to climb up the wall turning at various levels and going into one of the exhibition rooms. It provokes the direction of sightseeing, although it is not obligatory. This is one of the works that perversely interprets the design of communist Poland and exemplifies the recycling of modernist ideas present in each piece made by the artist. The majestic curtain (Façade, 2016), an appropriation from a typical building, is a steel skeleton, deformed under the pressure of powerful forces. Market (2013) recreates the makeshift amateur structures of market stalls from the Europa Fair at the 10th Anniversary Stadium in Warsaw, stored as scrap metal when the bazaar was closed in 2008; suspended under the ceiling, the bundle of the stall skeletons turns into an anonymous abstract tangle. Experiments with steel bending – ‘construction exercises’ – are conducted in many works, like in T (2017) – a T-bar bent to form the right angle and in Pipe, (2020) – a massive drainpipe cut in half with a burner and rolled up like a shred of paper. Looking for new inspirations, the artist reached the engineering architecture of the eminent creator of industrial structures, Vladimir Shukhov. The series Cross Brace (2019) refers to Shukhov’s projects made at the end of the 19th century in Russia, and next in the Soviet Union. The steel sculptures look stretched almost to the limit, using stresses that have never been tested before. Several of the latest works made of a mix of reinforcing bars and concrete refer to the architecture of Bangladesh, where next to the local version of modernism one can come across chaotic architectural reality, and where – despite the disruption of the principles of rational construction engineering – everything works. 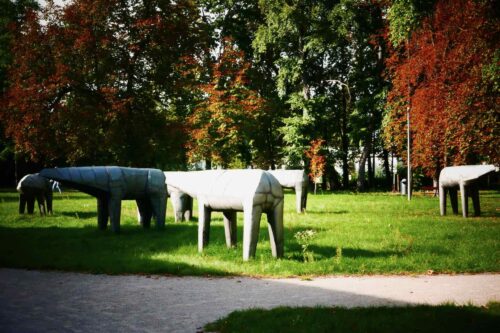 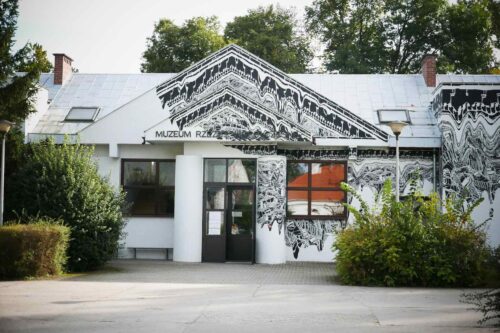 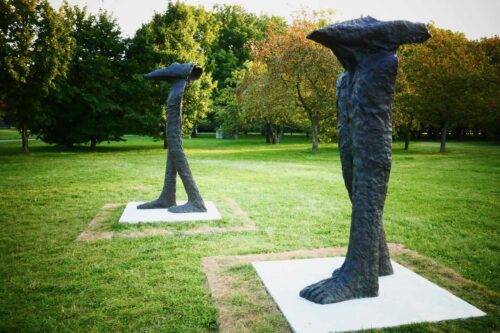 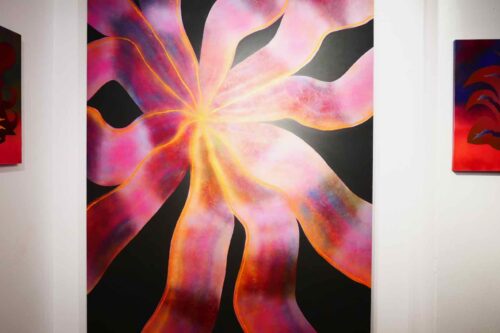