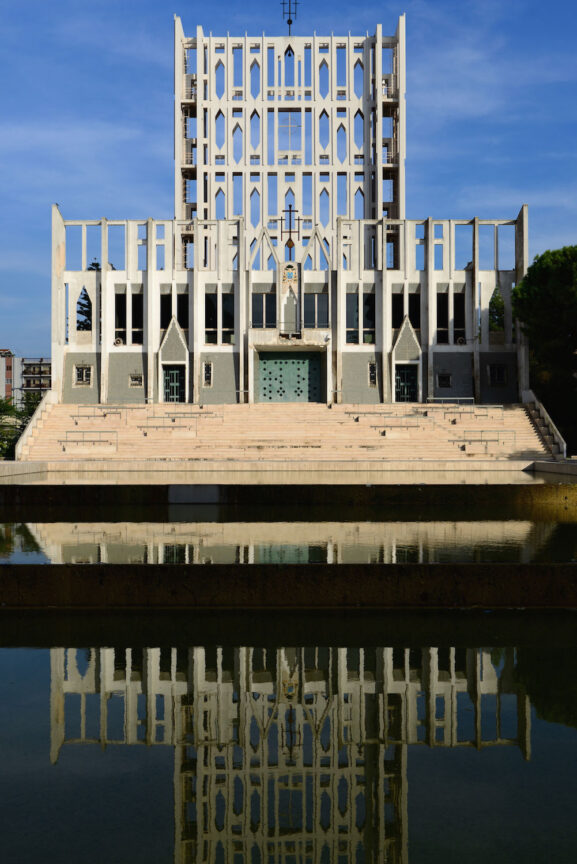 Considered one of the most influential architects and designers of the twentieth century, Gio Ponti (1891-1979) will be honored at the Musée des Arts Décoratifs in his first retrospective in France. A prolific creator who was equally interested in both industrial and craft production, Ponti revolutionized postwar architecture, opening up the way for a new art of living. The exhibition Tutto Ponti: Gio Ponti, Archi-Designer, presented in the museum’s main hall, covers the entirety of his long career from 1921 to 1978, highlighting numerous aspects of his work from architecture to industrial design, from furniture to lighting, and from the creation of journals to his incursion into the fields of glassware, ceramics and metalwork.

Over 400 pieces, some of which have never left their place of origin, trace this multidisciplinary display that combines architecture, furniture and interior fittings for private homes and public buildings (universities and cathedrals). The exhibition design was conceived by the agency Wilmotte & Associés in collaboration with the graphic designer Italo Lupi. 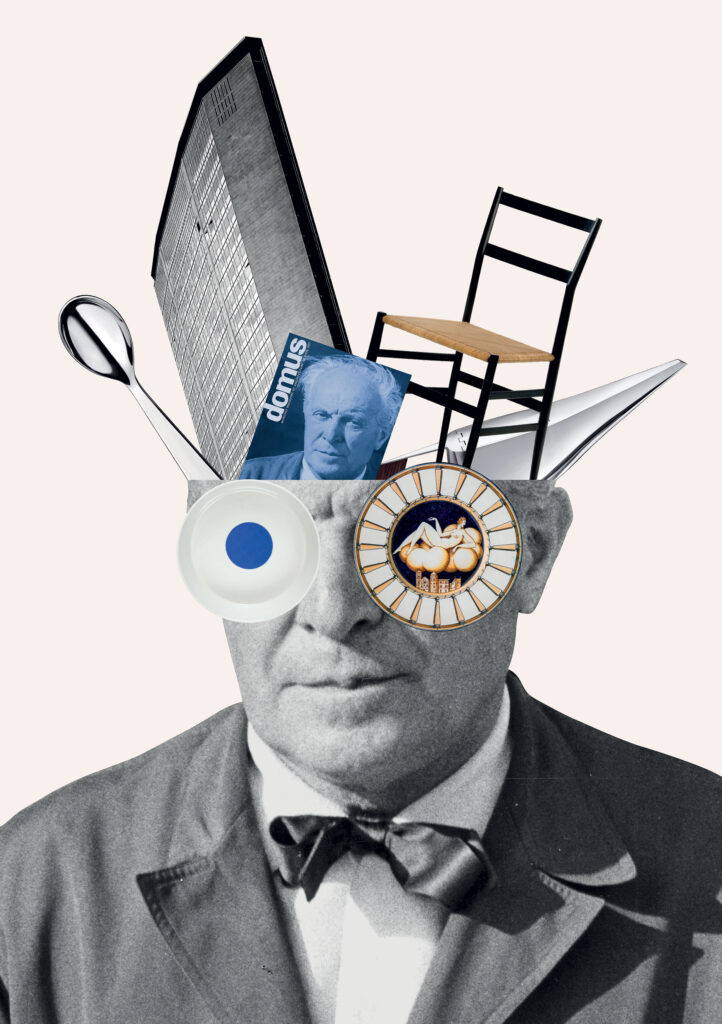 While Gio Ponti’s work is admired today by enlightened design enthusiasts and highly coveted by collectors, it nevertheless remains little known in France. This exhibition is an opportunity to introduce the wider public to the creative world of this mythical character from the Italian design scene, whose generosity and passion stimulated his contemporaries and continues to inspire new generations of designers and architects.

Having received his diploma from the Milan Polytechnic, Gio Ponti opened his architecture practice in 1921. In the beginning, he adopted the principles of classically inspired architecture with his villa on the Via Randaccio in Milan. Named artistic director of the Richard-Ginori porcelain manufactory in 1923, he re-evaluated its serial production system, applying his method to all of the company’s creations. His works of neoclassical inspiration were awarded prizes at the International Exhibition of Decorative Arts in Paris in 1925.

The following year, he designed his first architectural work abroad, the Ange volant villa in the Parisian aera, France, and collaborated with Christofle in Paris and Venini in Murano. In parallel, Gio Ponti created a series of modestly priced furniture with simple forms, called La Rinascente, for the Italian department stores, thereby making the decorative arts accessible to the greatest number.

Thanks to his connections with the movement Labirinto which gathered designers and manufacturers, he was able to spread his ideas and promote new talents thanks to the exhibitions that he organized at the Monza Biennial, and especially through the journal Domus, which he founded in 1928.

In the 1930s, his architectural practice took a modernist turn with the construction of Case Tipiche and the offices for the company Montecatini in Milan. Among his work in the field of homewares, he designed lighting for Fontana Arte, silverware for Krupp, fabrics for De Angeli-Frua and Ferrari and furniture for Casa e Giardino.

In the 1940s, Gio Ponti turned his attention to creating monumental frescos at the University of Padua’s Palazzo del Bo. He also returned to oil painting, and to his passion for writing, opera and the cinema, creating new screenplays as well as sets and costumes for la Scala in Milan. At the end of the war, as a major protagonist for the “made in Italy” movement, he promoted Italian design abroad through his journal Domus and the exhibitions he organized. He also conceived of two emblematic objects: the aerodynamic coffee machine La Cornuta (1949) for Pavoni and the Leggera chair for Cassina.

From 1950 to 1960, at the peak of his career, Gio Ponti’s style reached a wider international audience with major private architectural commissions in Venezuela, the United States, the Middle East and even Hong Kong. He created two of his masterpieces during this period: Villa Planchart in Caracas and the Pirelli Tower in Milan. Lightness, transparence, clarity, color and simplicity: these are the key words that describe the profusion of activity coming out of his headquarters in Milan – a veritable creative laboratory. He designed numerous objects and furniture pieces at this time, including the Distex armchair for Cassina and his luminous composition for Lumi.

In 1957, the chair Superleggera (a variant of the Leggera), one of the lightest in the world, became the icon of his furniture designs. Gio Ponti was particularly interested in the interplay between surfaces and colors, and worked towards making walls into elements that are no longer load bearing, but rather elevated, ethereal and almost suspended. He favored ceramic wall coverings that capture and reflect the light, as in the hotel Parco dei Principi in Sorrento.

In the 1970s, still seeking transparence and lightness, he envisaged his architectural façades as if they were folded pieces of paper pierced with geometric forms, as in the Taranto Cathedral (1970) and the Denver Art Museum (1974). He also took a new approach to furniture design, which became more flexible, mobile, light and luminous in order to adapt the space to contemporary lifestyles.

The exhibition Tutto Ponti: Gio Ponti, Archi-Designerpresents a chronological view of Ponti’s six-decade career in the fields of architecture, design, interior design and publishing. An evocation of the Taranto Cathedral, one of his late masterpieces, introduces the circuit that then unfolds in three parts, focusing on objects, furniture and architecture.

Finally, six “period rooms” conclude the visit with spectacular reconstructions emphasizing the global aspect of his work. The gardenside gallery explores the collaborations that he undertook with major art-object manufacturers such as Richard Ginori, Christofle and Fontana Arte, as well as with artisans and smaller companies. Ceramics, glass and metalwork intermingle with works in papier mâché and enameled copper. 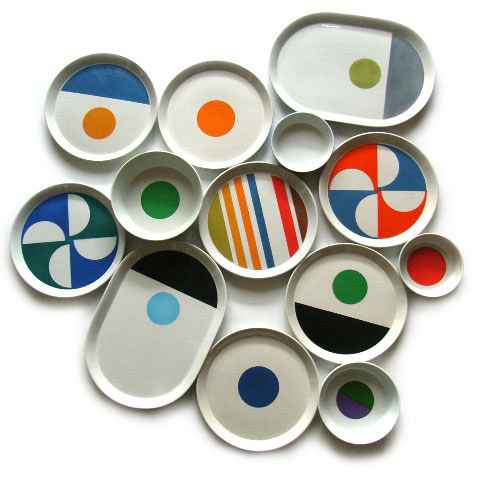 The main hall – the backbone of the exhibition – is punctuated by five sections featuring major commissions, furniture, lighting and textiles, as well as architectural projects detailed chronologically through drawings, models, photographs and films from the period. Finally, on the Rivoli side, six unique spaces have been conceived, each representing a decade, in order to highlight Ponti’s creations: l’Ange volant in the Parisian aera, the Montecatini building in Milan, the palazzo Bo – Padua University, Gio Ponti’s home on the via Dezza in Milan, the interior of the Parco dei Principi hotel in Sorrento and finally the Villa Planchart in Caracas.

Until the very end, Gio Ponti defended his notion of an “Italian house”, considered to be the ultimate expression of an authentic modern and international civilization. The expression “from the spoon to the city”, attributed to the Italian architect Ernesto Nathan Rogers (1909-1969) in reference to Gio Ponti, perfectly embodies the personality of the Milanese architect, whose projects could range from the infinitely small to the infinitely large.

This catchphrase sums up the breadth of Ponti’s field of exploration, through which richness and originality remained constant in his joyful, colorful and very personal work. 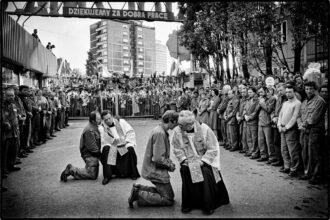 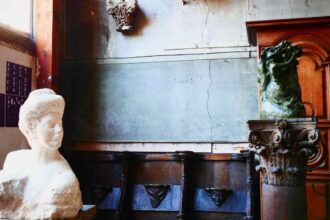 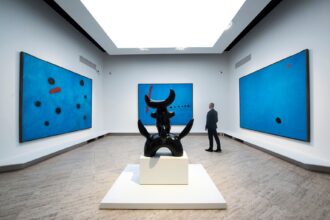